Standing out from the Crowd: Developing new Cycling Tourism Products and Concepts 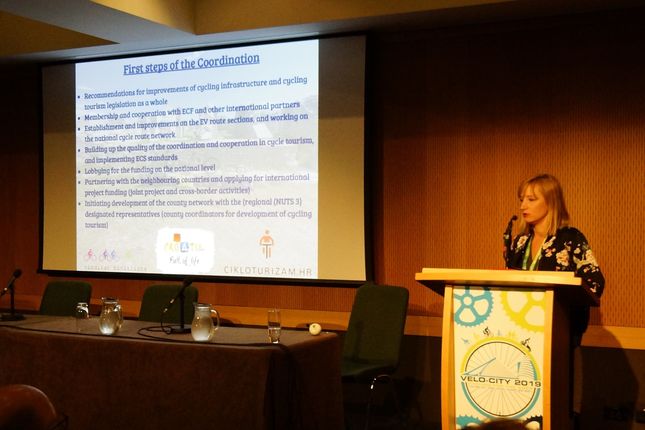 The growth of cycling tourism over the past decade has meant that destinations have had to develop unique selling points in order to stand out in an increasingly crowded market place. During this session, we heard about the new products that have emerged in recent years in Europe and further afield. The presentation showed how cycling tourism can be beneficial to local communities and cultural heritage sites, in addition to tourists.

Tena Šarić, NGO Sindikat Biciklista from Zagreb, Croatia started with the quote written on the bus transporting the Croatian football team in 2018, when they came in second in the World Cup: “Small country, big dreams” which relates to big ambitions in developing cycling tourism in Croatia. Four EuroVelo routes are currently crossing Croatia, the 6, 8, 9 and 13, and even before Croatia started with their EuroVelo National Coordination Centre they had the strategy and action plan for cycling tourism in place. A lot of work has already been done to improve cycling tourism, plan for national and state interchange routes, regional cycling routes, new book of regulations for signage of cycle routes, the national centralized website for cycle-tourism (www.cikloturizam.hr) and the National Tourism Board is participating as a project partner in the MedCycleTour project on the EuroVelo 08 route. We are all invited to Zagreb right after next year Velo-city in Ljubljana to attend their “Pedalafest” event in early June 2020.

Giulia Cortesi, from the Friuli Venezia Giulia region in Italy, presented how the diversity of waters in their region is used to improve the cycling tourism and tourism in general based on their best practice exchange and collaboration with Japan and Taiwan, which started at Velo-city 2016 in Taiwan. In the Friuli Venezia Giulia region, they recognized that water is a trigger for economy and how the focus on cycling tourism and the shift from the Cruisers tourism can make the tourism sector more sustainable. They already held a workshop in Trieste focusing on the local government to implement intermodality solutions especially on water, like On-demand bridges and river crossings with small ferries where there are no bridges and the demand is high. At the end, she concluded that “Diversity of waters is a gift from heaven”.

Jesper Porksen, Director of the Danish Cycling Tourism, Denmark focused on tourism-related problems, especially too many tourists in large cities like their capital, Copenhagen, which is facing a big pollution problem with cruisers which while in dock, stay with engines turned on because there is no electricity connection on the dock. Additionally, it is well known that the cruisers bring mostly low-spending tourists who are also less active due to their mode of travel. On the other side, we are facing the negative health impact of a sedentary lifestyle. The solution is easy: Bicycle!

Biking is social, cycling-friendly cities are friendlier, cyclists have access to the country-side and the cyclist is connected to nature.

Economic benefits of cycling tourism are high spending, a turnover of 10 million in overnight stays and over 1 billion Euro income while bringing more spending to the local level. As there was a slow increase over the years, their recipe for cycle-tourism is that it has to be visible, accessible, safe but fun, guided but explorative. To improve cycling tourism in Denmark they suggest to stakeholders: “Make it easier to go on a bike-tour!”

Louise Böhler, from the ADFC (German Cyclists' Association), Germany, presented how cycling tourism contributes to the transition of mobility systems, emphasizing that infrastructure is basic as almost 60% of people are interested in cycling but worried about their safety and the infrastructure while only 4% will cycle on all conditions. Germany recognized the advantages of cycling tourism like added value and jobs, strengthening rural areas and how cycling tourism creates enthusiasm for cycling in general. One of their studies show that 35% cyclists cycle more after their cycle holidays.

She followed with two examples, the city of Bremen which recognized that, if residents don’t cycle, the tourist will also not cycle. Their slogan is “Bremen Bike it!” and as they recognized the importance of the bicycle for the city and development, it was easy to achieve the modal split of 25% in Bremen. The second example is the cycle-highway from Hamm to Duisburg in the length of 101km which is mostly used for commuters. She concluded that everyday cycling and cycling tourism must be thought and planned together because creating better infrastructure for cycling tourism will also benefit bicycle traffic in general.