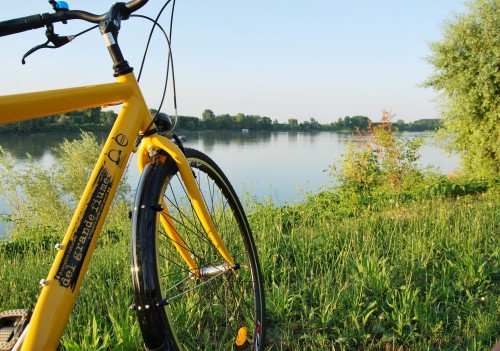 In the frame of the MEDCYCLETOUR (EuroVelo 8 – Mediterranean Route) project, the partners from 7 different countries (Spain, France, Italy, Slovenia, Croatia, Greece and Cyprus) are improving their sections of the route by conducting four types of pilots. Discover two of them in this article!

These pilots include new signing with easily recognizable EuroVelo route information panels, the installation of counters along the route to monitor its use by cyclists and pedestrians, the organization of surveys to get some insights on how cyclists use the route and if they see any need for improvements, the development of intermodality schemes allowing cyclists to take their bike on busses or trains, and the setting up of national Cycling Friendly Services Networks including accommodation, tourist centers, restaurants, etc.

Some of those pilots have already been implemented in 2018, while others are currently being implemented and will be ready in the course of 2019. In this article, we will look at concrete examples for two of them: the signing in Andalusia and the counters and surveys in Catalonia. Make sure to stay tuned in January to learn about the other two pilots, namely the bike shuttles in Mantova (Italy) and the Cycling Friendly Services Network “Accueil Vélo” that has been set up in the French department of Alpes-Maritimes!

The Agency of Public Works of the Andalusian Government has designed a specific EuroVelo signalization to sign two sections of EuroVelo 8: one in Cadiz (72 km from Facinas to Torreguadiaro) and one in Almeria (94 km from Almería City to Carboneras). In total, 166 km of EuroVelo 8 – Mediterranean Route are thus being signed in Andalusia! The sections are displayed on the following maps 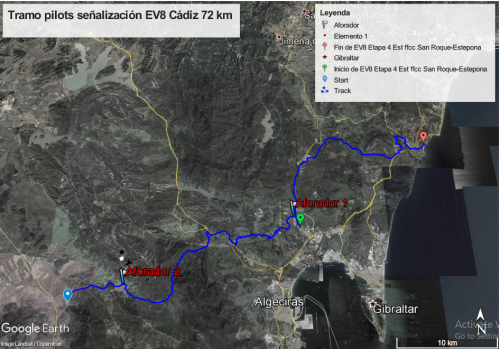 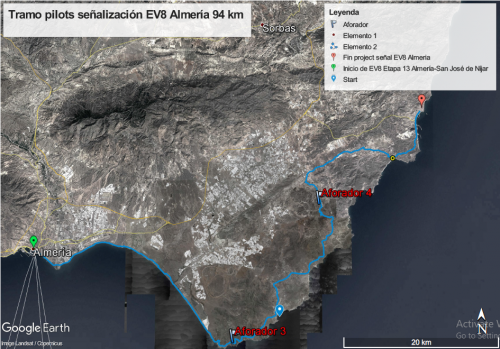 Moreover, wooden detailed information panels about EuroVelo 8, in Spanish and English, can be found in National Parks: 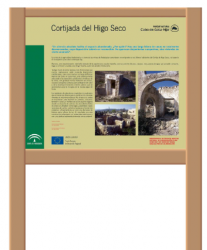 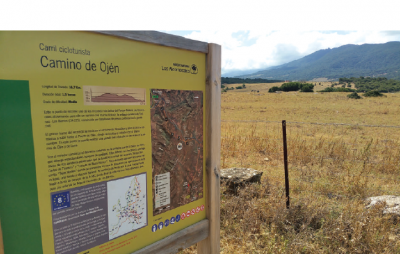 If you still haven’t cycled the amazing trail of EuroVelo 8 in Andalusia, now is the time to go and follow the brand-new signing! The signing pilot is a popular one and it also being implemented by 6 other project partners: the Alpes Maritimes Department (France), the Croatian National Tourism Board, the Region of Western Greece, the Catalonia Region (Spain), the Consorzio Oltrepo Mantovano (Italy) and Cyprus Tourism Organisation.

Counters and Surveys along EuroVelo routes

Let us now turn to the counters and surveys pilot. We will look at the work done by the Catalonia Region in Spain. The Directorate General for Tourism of the Generalitat of Catalonia, with the help of the Girona Greenways Consortium (Consorci de les vies verdes), have installed two types of eco-counters along the route in Girona: a “PYRO-Box - People Counter” and a “MULTI Nature - Multi-Use Counter”. The objective is to acquire data on the kinds of users who take the EuroVelo 8 in Girona. Using this data will hopefully help influence the adoption of policies in favor of sustainable tourism in the region. The map below shows the situation of these counters: 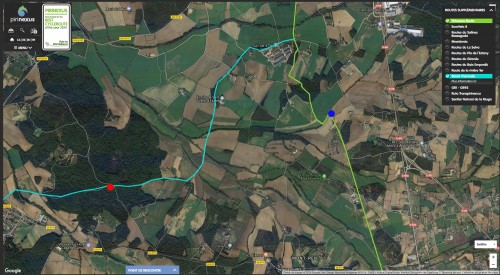 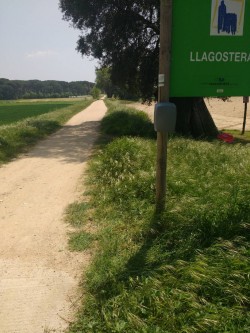 The first model is a mobile and bidirectional counter allowing to count both cyclists and pedestrians passing close by, without having to differentiate between them. It uses a PYRO sensor that counts people passing within its range by detecting their body temperature. The fact that this counter is mobile will allow to move it depending on current interests.

The second model does differentiate between cyclists and pedestrians by using two types of sensors: the PYRO one (as in the PYRO-Box Counter) and a ZELT sensor with an inductive loop, which is installed under the surface of the trail. The inductive loop can detect bicycles passing or arriving at a certain point via the electric currents induced in the wire loops. This counter is thus a fixed one and is located in Caldes the Malavella. It has a GCM connection allowing AOPJA Andalusia to download the data from their office. It is also bidirectional and able to measure the direction of travel. See in the following pictures what the MULTI Nature Counter looks like: 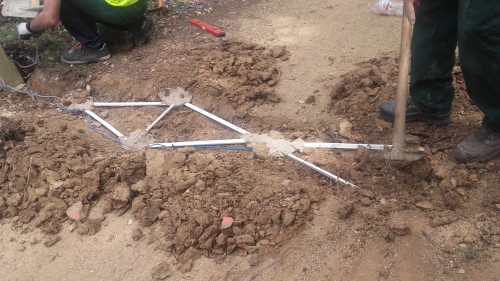 The Catalonia Region will also organise a survey with 600 interviews of 10 to 18 questions. The data collection will take place for 8 to 12 months and then be subject to data analysis in order to extract information on the profile and needs of the route’s users and their economic impact on the local community.

But Catalonia is not the only project partners to install counters along the route and to run survey among cycle tourists. AOPJA Andalusia, the Region of Friuli Venezia Giulia (Italy), the Alpes Maritimes Department (France) and the Regional Development Center of Koper (Slovenia) also participate in this pilot.

We invite you to visit the MEDCYCLETOUR website to learn more about this project co-financed by the European Regional Development Fund, and about the pilots that were not detailed in this article. Next month we will disclose the stories of the Bike Shuttle organised by the Consorzio Oltrepo Mantovano and of the Cycling Friendly Services "Accueil Vélo" in the Department of Alpes Maritimes! We are convinced that these investments, allowing the development not only of the route’s infrastructure but also of services intended for cycle tourists, will greatly improve EuroVelo 8 – Mediterranean Route and make it a high-quality cycle route!